Barbara and Alan Bagnall have lived in their current home at the top of Jennings Street in Curtin since 1966. From their house they can look out over the old property of Illoura where Barbara, born Barbara Tanner, and her family lived prior to the development of Curtin. Alan's family moved to Canberra when he was three. Both Barbara and Alan went to school in Canberra. They met when both were working in the Australian Bureau of Statistics. While Barbara had to leave the public service when she and Alan were married, Alan progressed up the ranks to be Australia's Acting Statistician. Barbara and Alan adopted two children. They were active in the Canberra Alpine Club. Alan was a keen bush walker. Barbara has done much volunteer work. They had a much loved beach house at Rosedale.

Location, activities and family life at Illoura, the Tanner farm; Barbara's parents, siblings and school life; Barbara and Alan's home on Jennings Street; how Alan's family came to Canberra; Alan's education and employment; how Barbara and Alan met; life in Canberra; the 2003 bushfire in Curtin; reflections on living in Curtin. 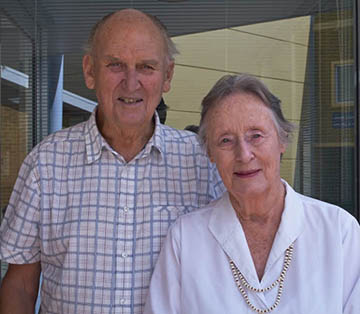